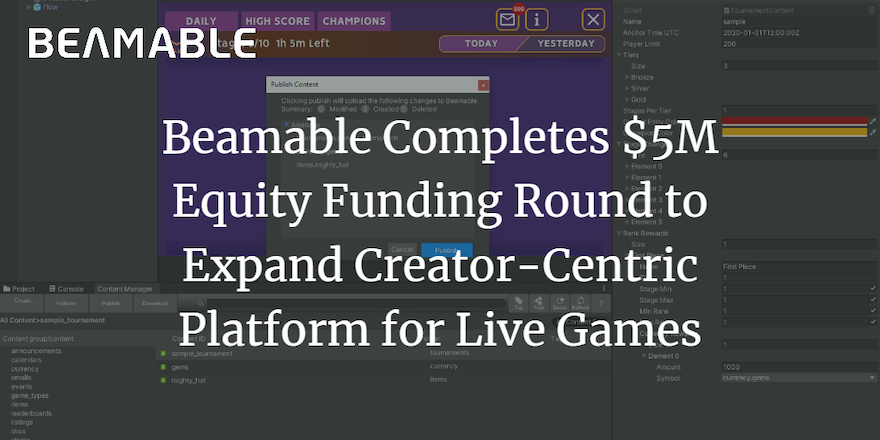 Beamable has closed on an equity financing of approximately $5M in an oversubscribed round. The financing was led by Companyon Ventures and GrandBanks Capital, and joined by investors from Defy.vc, Oyster Funds, and others. Beamable fights for the game makers of the world by equipping them with the technology to help them continuously operate, update, monetize and socialize their games.

Since last year, Beamable has signed up over 100 game studios to its platform with a focus on developers that have embraced the Unity 3D engine, which enjoys a 71% market share among the top 1,000 games in the world. Beamable’s advantage for Unity developers is its creator-centric, low-code approach to live games. Over 20 million users have accessed games built on Beamable, resulting in $150M in revenue transacted over the platform.

“Game studios want to focus on what they love most: building great games,” said Jon Radoff, CEO of Beamable. “We saw them struggling with workflow: brittle processes, continuously reinventing the wheel, or coping with complex backend-as-a-service products. Studios come to us because they need a platform built around Unity that makes it easy to deliver new content and features, drives social engagement, and delights paying players.”

Research analysts at GlobalData report that the $300 billion game industry is shifting toward an as-a-service business model. This transformation requires a new set of software infrastructure to enable game studios to perform content management, monetization, and social experiences for their audiences. Beamable forecasts that the addressable market for software and cloud services to support this industry will exceed $20 billion by 2025.

“What impressed us about Beamable is the vision for enabling any designer to create amazing games without the burden of building and rebuilding the backend infrastructure for those games,” said Firas Raouf, general partner at Companyon Ventures. “And the decision to invest was made that much easier after we spoke to the studios that are currently using Beamable to power their game revenue while lowering their live-game operating costs by up to 75%.”

About Beamable Beamable provides a Software-as-a-Service platform for the business operations of live games. The platform is tightly integrated with the Unity 3D engine, enabling game developers to focus on the creativity and differentiation of their products. Led by a team of game-industry and Software-as-a-Service veterans, Beamable is based in the Boston area, and backed by investors including Companyon Ventures, GrandBanks Capital and Defy.vc. For more information, visit https://beamable.com.